Road traffic collisions account for 36.7% of all child deaths, and road deaths are the leading cause of child mortality in Ireland, the RSA’s Annual International Road Safety Conference heard today Thursday 2 April 2015. The conference took place at Dublin Castle and focused on children and road safety.

The child safety theme was particularly relevant as it’s mid-term break for schools and given the fact that the number of children killed on our roads almost tripled last year. 14 children under the age of 15 lost their lives in 2014. Seven were passengers, seven were pedestrians. 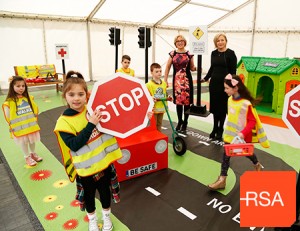 While child fatalities have decreased by 89% and serious injuries by 75%, from 1997 to 2012, a total of 262 children were killed and 1,115 seriously injured in that period*. The greatest danger a child faces each day is when using the road: when travelling as passengers in a car, walking, or cycling. Just under half of all children who die do so while walking and almost 2 out of 5 children killed are passengers.  Garda reports into collisions indicate that 1 in 10 children were not wearing a seatbelt or using a child restraint.

“We shockingly saw almost triple the number of child deaths on our roads last year. We can now either watch this trend continue, or we can collectively take action; to make sure no more children’s lives are lost on our roads this year or any year. A seemingly daunting task, but certainly possible when we work together.

Children are our most vulnerable road users but they cannot be responsible for their own safety when using the road. They simply do not have the cognitive skills to be able to recognise danger. That’s why it’s up to us as adults to do the right thing and protect them. Parents must treat their children like precious cargo when they are carrying them as passengers in cars, and ensure they are properly restrained. They are incredibly vulnerable to injury because of their size and age. There is no room whatsoever for complacency or exceptions – no matter how short the trip.”

The conference, which was attended by over 200 delegates, featured speakers from Sweden, the Netherlands, the UK and Ireland. Among the speakers at the conference was Mr Rod King, MBE, Founder & Campaign Director, UK ‘20’s Plenty for Us’, who presented on his campaign which shows that most of the large urban local authorities in the UK are implementing area-wide 20mph (30km/h) limits, and shared the resulting benefits for children in local communities around the UK.

Garda Commissioner Nóirín O’Sullivan, An Garda Síochána who spoke at the conference said:

“It is great to be here today and to see first-hand road safety measures from all over the world being shared. It is also great to see the work being done here at home to encourage children to be safe and smart road users, and to educate drivers about sharing the roads with our most vulnerable road users. Events like these where we share best practice with our international counterparts keep us all safer on the roads and enables us to work towards our goal of making Irish roads the safest in the world for children.” 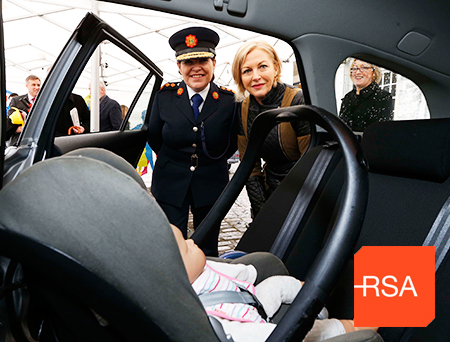 The conference also saw Dr. Margaret Ryan, from the School of Psychology Trinity College Dublin talk about children’s development and how their age determines their ability to negotiate traffic; Dr Divera A.M. Twisk, of the SWOV Institute for Road Safety Research, Netherlands who presented on risk taking among young adolescent cyclists; Velma Burns, Research Manager with the Road Safety Authority who presented on key influencers in a child’s decision making when it comes to crossing the road safely.

Professor Alf Nicholson, Consultant Paediatrician at Temple Street Hospital shared an overview of child deaths and causes in Ireland, specifically focussing on child deaths on the roads; Moyagh Murdock, Chief Executive Officer of the Road Safety Authority who presented on the educational resources run by the RSA, Katarina Bohman, Principal Research Engineer in Autoliv Development AB, Sweden who presented on the different medical outcomes for children involved in a road traffic collision when compared with adults.

Ms. Aisling Leonard, Senior Road Safety Promotion Officer with the Road Safety Authority who presented on the RSA’s Check it Fits project, which is a child car seat safety initiative.

Broadcaster, Journalist and TV Documentary Presenter Mr Charlie Bird presented a new RSA series of short documentaries on child safety on our roads, including school gateway risk, housing estate risk, and child safety in cars. The series can be viewed at the following links

The Right Click Report in the Royal Irish Academy